For some years, I have been enjoying Anna Massie and Mairearad Green’s fantastic work. I think I have only managed to see them twice live but they were outstanding both times. Their CDs have many great tracks, but this Retreat March on their album Doubling struck me as something that we could manage to play… unfortunately on the CD (which you can hear on Youtube), it is played in a difficult key because Mairearad is playing her Highland pipes in Bb… If you don’t know their work, I really encourage you visit their website and try them out.

I struggled to write out the tune, but fortunately Jane, amazing as ever, wrote it out for me and then I asked Anna Massie if we might use it. Anna tells me that this tune was written by Iain MacCrimmon of the famous MacCrimmon piping family. Retreat Marches were written in 3/4 or 9/8 because they were played when they were leaving the parade ground and not marching (and not as the army retreated from the field of battle!).

Calum MacCrimmon (Iain’s son) also plays pipes (and many whistles too) and he talks to his father in this video. Iain and Calum have created several books of pipe tunes, and McCrea’s Delight can be found in Iain’s collection (Book 4). Normally it’s played in D, but the highland pipes are in Bb so it sounds a semitone higher (ie in Eb major). I shifted it to G as that suits most instruments for this range. Calum is a member of Breabach who have their own Youtube channel and website.

David has spoken with Calum (who helpfully corrected my spelling of McCrea) and tells us that the tune gained its name when Iain found Milt McCrea (of the Big Rick Pipe Band) in tears of delight – Milt had come over from Canada for the World Piping Championship and became all emotional because playing at the World Championship had been his long held dream!

Calum has sent a picture of the original tune which I’ve put below our version. It’s useful to see all the extra notes the piper wants to add to the tune. Some call these “ornaments” but Alasdair Fraser says these are more like the dialect or language – the way that the player adds them makes the tune their own.

I recommend listening to Anna Massie and Mairearad Green’s recording… but you can’t play along with that recording as it’s in a different key.

Jane has sweetly given me a recording of her on the violin:

And I recorded myself on the violin and emailed it to Ray – who has done a great job of accompanying me on three different accordions and putting it all together in Garageband: “I was experimenting with a few different things, so the first time is played with my Fratelli Crosio accordion (the red one), which is actually my best instrument.  It is tuned “wet,” i.e. a quarter semitone sharp, and I had it on the dual read setting. Usually this gives a nice bright tone when played along with a standard A440 tuning. The second time through was with my Hagstrom accordion (the green one from Sweden) which was a low-end mass market accordion which I had reconditioned. It’s also double reed (tuned slightly apart for vibrato effect), but is tuned spot-on A440.  (“dry”).  The third time through was with my little Geordi melodeon, which is single-reed tuned spot on A440 as well.” You can hear our combined efforts here:

Tess has bravely recorded herself and emailed it to me, which Ray has added to our joint recording. Sounds great all together:

And Ray has helped me by providing chord suggestions for the music too. If you would like to add a recording of yourself to our arrangement, please email me.

And the pdf is here 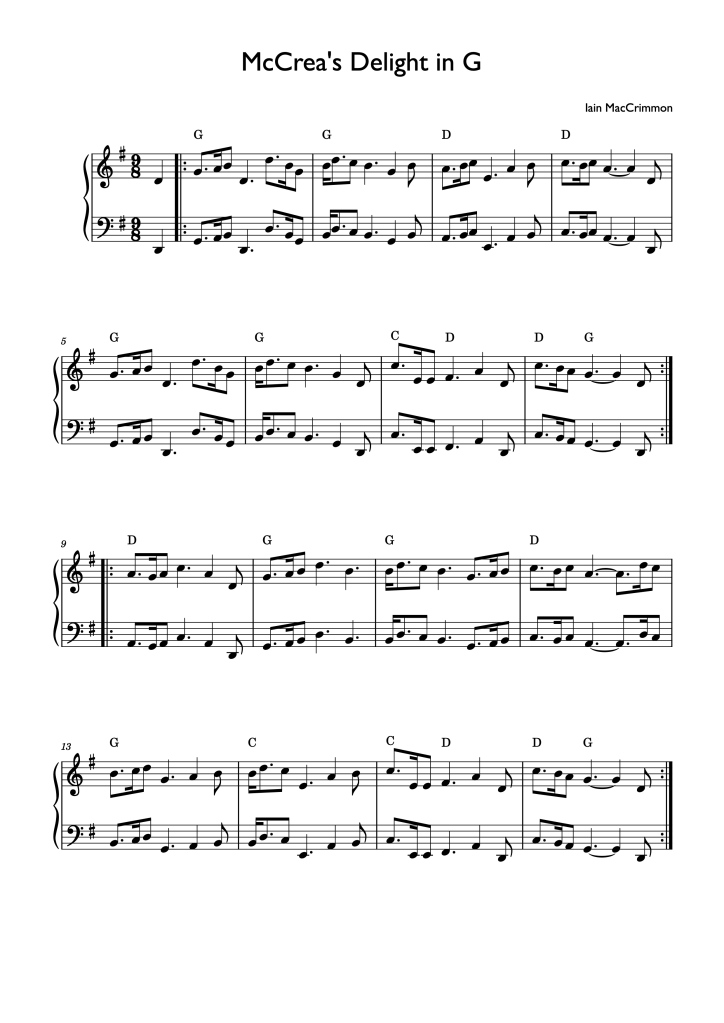